The project is a big undertaking with a big purpose: protecting Foster City’s people and property for years to come.

Let me start by saying that it was a pleasure to learn more about construction projects, especially new projects involving levees. I thank the speakers Louis Sun and Jonathan Tristao, Ina Acuña, Doug Hahn, the Professionals at large, and the great Audience interaction for this important, necessary infrastructure to allow the Foster City community to thrive into the future.

Living near water is a wonderful thing—except when there’s a flood. So Cities either build or reinforce levees. A levee is a natural or artificial wall that blocks water from going where we don’t want it to go and usually runs parallel to the way the water flows so that levees can help direct the flow of the water.  Also, levees may be used to increase available land for habitation or divert a body of water so the fertile soil of a bay or marina may be used for agriculture or wildlife refuges. Lastly, in the case of this project, levees prevent the Lagoon System (212 acres) from flooding cities in a storm surge as the water is pumped out to the Bay. If a levee breaks, the consequences can be widespread and disastrous.

As I have personally been out to the work site many times, I am pleased to report that significant progress has been accomplished on the Foster City Levee improvements project!  I can see with my own eyes many active construction areas, and the project team recently accomplished a couple significant milestones with the installation of the final sheet pile in Phase 2 (from Shorebird Park to the San Mateo Bridge). I believe that these sheet piles will form the "upgraded wall" structure in this section of the levee for protecting the community until the year 2050.

The Foster City Levee, owned and maintained by the City, surrounds the majority of the outer bay-front perimeter of the City to provide flood protection.  The Levee Improvements Project will increase the height and width of the levee to improve protection against storm/tide surges, meet sea level rise projections through the year 2050, maintain FEMA accreditation, and make the levee more resistant to earthquakes.

Let's talk about what levees are: they are designed to reduce flood risk from flooding events; however, they do not eliminate the risk entirely. It is always possible that a flood will exceed the capacity of a levee, no matter how well the structure "sheet pile" is built. Artificial (earthen) levees prevent flooding. But they also create a new problem, levees squeeze the flow of the water. All the water’s power is flowing through a smaller space. Water levels are higher and water flows faster. This puts more pressure on other levees downstream and makes the water more difficult to control. If levees break or encounter seepage, it makes containing the flood much more difficult.

Let's look at some of the discussions that were raised during the PMI-SFBAC Sustainability event.

1.) The $90 million new levee would be made of earthen, block wall and steel and would run around the city along the existing bayside rock, recognized by many as the scenic bike path. Due to passing of Measure P, Foster City was able to avoid the imposed FEMA designation of the city as a flood zone, thus avoiding requirements for homeowners to purchase expensive, permanent flood insurance e.g., $560 a year increase in taxes to save your home, compared to $2,000 or more per year.  I believe that Measure P represents a meaningful partnership between the City and the community members. Moreover, the temporary inconveniences and disruption (an increase in noise, dust, and traffic delays), this project will result in an improved levee to protect the entire community for generations to come, and the entire Bay Area will be measured against the Foster City Levee project (review, learn and follow) along & around through the South Bay.

2.) The project will increase the levee height and make other significant and sustainability improvements designed to protect Foster City homes, schools, businesses, and essential infrastructure during storms and high tides, and from the threats of future sea level rise due to climate change. The improved levee will also be more resistant to earthquake damage. In addition, as part of the project, the Levee Bay Trail will be widened to provide an enhanced, more inviting recreation destination for many City and community users.

3.) The community needs to think about the installed, permanent retaining structure and the aesthetics of the exposed sections of the wall - what to do?

It is important for the project team to keep in mind when building shoreline protection that the project aligns and connects with joining projects in the context of the broader region because every community throughout the Bay is connected by the shared Bay water (From Napa, Sonoma, San Bruno, San Leandro Marina to San Jose). We all intuitively know that any potential impacts of these projects to humans, other species or land construction could have unintended consequences e.g., impact to natural resources, aesthetic depreciation and marine sanctuaries.

This introduction to the project continues to inspire my own musings. How to prevent build-up of excessive hydrostatic water pressures or seepage behind the sheet pile wall (geotechnical standpoint)? What about water intrusion detection? Security measures related to levee penetrations and closure structures should be considered. Sensor systems should be considered for detecting problems, remotely if practical. Such systems may include pressure sensors, motion sensors, disturbance detection cables, and water flow detectors such as water level gauges and piezometers. 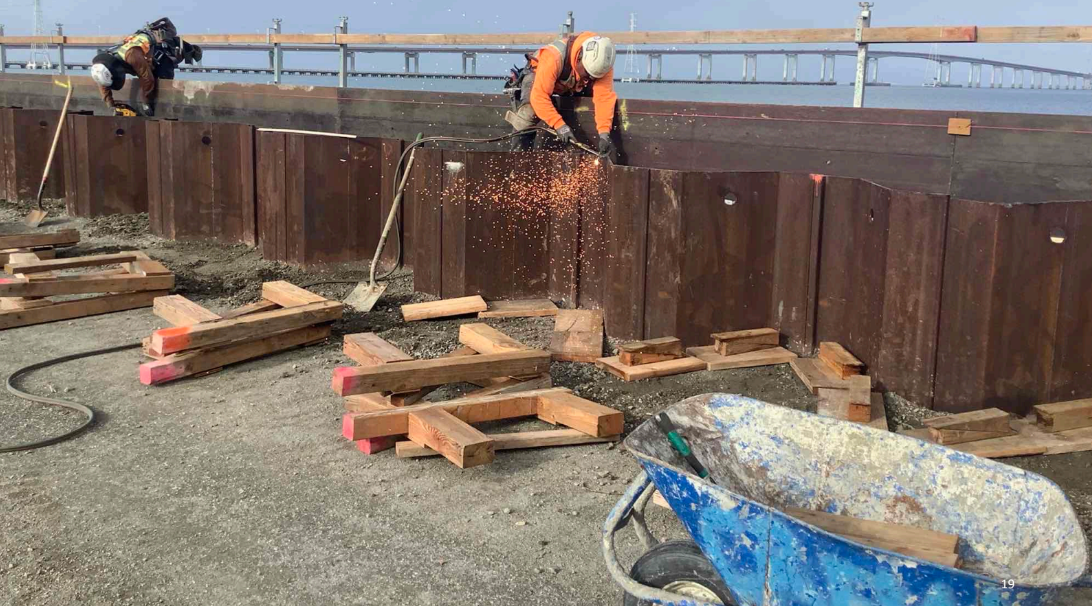 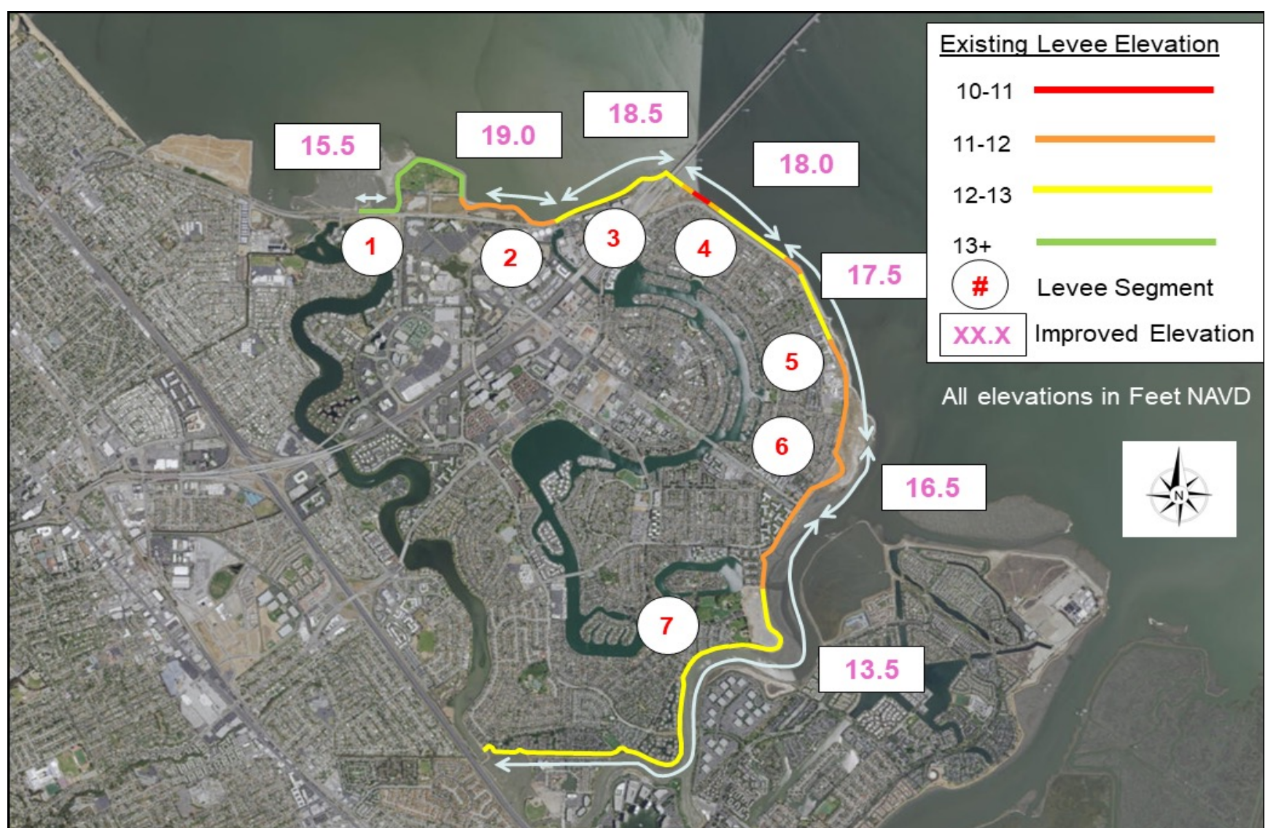 Jim Bischofberger has been working in project management for eight years and applies project management methodology to his personal life. His projects have encompassed new intelligent roads & urban streets for sustainable communities for better quality of life and playing outdoors, making outside more safe, efficient and higher quality or “road diets”.

Note from PMI-SFBAC VP Sustainability: Join us for our upcoming events! You can register at pmisfbac.org/sustainability.